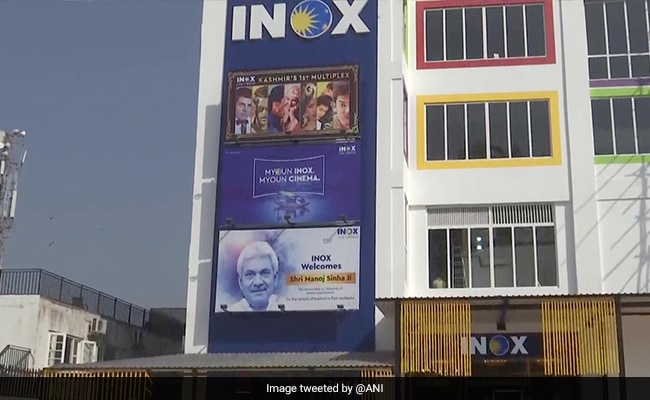 The first multiplex in Kashmir was inaugurated by Lt Governor Manoj Sinha.

Jammu and Kashmir Lieutenant Governor Manoj Sinha on Tuesday inaugurated the valley’s first multiplex in Sonawar area of the city, ending the three-decade wait of the movie buffs to watch their favourite stars on the big screen.

Inaugurated INOX multiplex theatre in Srinagar. Congratulations to the people, Sh. Vijay Dhar & INOX Group. A major Socio-economic revolution is sweeping through J&K in the last 3 years. It is reflection of a new dawn of hope, dreams, confidence and aspirations of people. pic.twitter.com/VhdiVTHhQw

He said, “It is a reflection of a new dawn of hope, dreams, confidence and aspirations of people.”

The regular shows will start from September 30 with the screening of Vikram Vedha, starring Hrithik Roshan and Saif Ali Khan.

The first multiplex in Kashmir will have three movie theatres with a total capacity of 520 seats. The premises will also have a food court aimed at promoting the local cuisine.

The opening of the multiplex, which will be operated by INOX, comes close on the heels of the Lieutenant Governor inaugurating multipurpose cinema halls — one each in the twin Pulwama and Shopian districts.

The cinema halls have reopened in the valley after three decades as theatre owners downed their shutters in the Valley due to threats and attacks by militants in 1989-90.

The Valley had seen nearly a dozen stand-alone cinema halls functioning till the late 1980s, but they had to wind up businesses after two terror outfits threatened the owners.

Though authorities made attempts to reopen some of the theatres in the late 1990s, terrorists thwarted such efforts by carrying out a deadly grenade attack on Regal Cinema in the heart of Lal Chowk in September 1999.

Two other theatres — Neelam and Broadway — had opened their doors but had to shut business due to poor response.

Sagar Rajbharhttp://newsddf.com
Sagar is the founder of this Hindi blog. He is a Professional Blogger who is interested in topics related to SEO, Technology, Internet. If you need some information related to blogging or internet, then you can feel free to ask here. It is our aim that you get the best information on this blog.
- Advertisment -
RELATED ARTICLES
News